Altona is a western suburb of Melbourne, 13 km southwest of Melbourne CBD. Its local government area is the City of Hobsons Bay. It is a large suburb with a low population density. A key feature is Altona Beach on Port Phillip Bay, which is one of only two swimming beaches in the western suburbs, the other being Williamstown Beach. Prior to arrival of Europeans, the Altona area was home to Kurung-Jang-Balluk Aboriginal people of the Woiwurrung clan. Altona was first permanently settled in 1842, with the construction of The Homestead by Alfred Langhorne. The name “Altona” first appeared on maps in 1861. It was named by Taegtow, a man from the German city of Altona which is today a borough of Hamburg. Taegtow believed that coal would be found in the area, and in 1881 he formed the Williamstown (Taegtow) Prospecting Company.

From 1886, housing in the Altona and Merton Street estates was sold, and by 1901 the Victorian Government owned an explosives reserve in the west of Altona. On 20 Feb 1911, J.J. Hammond flew the first cross-country flight in Australia from Altona Bay to Geelong and on 23 February, also at Altona Bay in Victoria, he undertook the first powered passenger flight in Australia.

Coal mining formed the basis of the local economy from 1908 to 1919. However, this was brought to an end in 1930 when open-cut mining was developed in the Latrobe Valley. By 1918, the population was sufficient to justify a Post Office which opened on 14 Jan 1918. Similar to the rest of Melbourne, following the Second World War, Altona embraced a large influx of immigrants, primarily from the Mediterranean, Central Europe and a smaller number from the Middle East.

From 1862, Altona was a town in the Shire of Werribee. But in 1957, the Altona Riding of the Shire, which included Altona itself as well as Altona North and Altona Meadows, was annexed, and became the City of Altona in 1968. This was merged into the City of Hobsons Bay in June 1994 under local government amalgamations undertaken by the Kennett government.

Altona has many significant parks and gardens, including some important environmental conservation areas and wetlands along the shores of Port Phillip. It has a long promenade along the bay known as the Esplanade and Altona Pier. The parks and reserves include Cherry Lake, Altona Coastal Park, Truganina Coastal Parklands, Kororoit Creek and Laverton Creek.

The Altona Beach Festival is a free event held annually at the Logan Reserve precinct, to promote and celebrate Hobsons Bay and the western suburbs. It involves various activities, including a twilight street parade, beach market, double-decker bus tour, professional entertainers, RAAF fly-overs and fireworks off the Altona Pier. Now in its second year, the Altona Beach Festival was previously known as the Bayside Festival and also Operation Recreation and some residents may still refer to it by these names. The 30th anniversary of the festival was held in 2007. It enjoyed a brief period of heightened prominence in 2002 when it was featured on the Channel 9 travel program Postcards in a segment hosted by Geoff Cox. The festival is easily accessed by buses and suburban passenger trains as it is just a few minutes walk away from Altona Station.

The Altona City Theatre is a production company based in the Altona Civic Theatre, producing two major musicals and a smaller pantomime annually. The pantomime coincides with the Bayside Festival and was originally intended as an outlet for young directors. 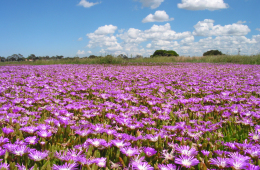 Everyday when I take train home or to work, I will marvel at the pink carpets of pigface...